The WATer CHerenkov Monitor for Anti-Neutrinos (WATCHMAN) is the first experiment planned for the Advanced Instrumentation Testbed (AIT) facility just starting construction at the Boulby Underground Lab. The main purpose of WATCHMAN is to develop technology and data analysis techniques to demonstrate the ability to monitor nuclear reactors from distances of 10's of kilometers as part of future Nuclear Non-Proliferation Treaties. WATCHMAN will be able to use the Hartlepool Nuclear Power Station (a distance of 25 kilometers away from the Boulby Lab) as the source of reactor anti-neutrinos for this study.

WHAT DO REACTORS HAVE TO DO WITH NUCLEAR WEAPONS?

Nuclear weapons require production of elements that can undergo nuclear fission, the splitting of an atomic nucleus into two pieces. It has been known since the 1930's that the
two pieces actually weigh less (that is, have less mass) than the original nucleus. This "missing mass" is actually turned directly into energy following Einstein's famous formula E=mc2. Some nuclei are inherently unstable and undergo spontaneous fission, albeit this process is very rare and thus happens slowly over millions of years. The example shown here is for 235-Uranium, which can spontaneously split up into 140-Xenon, 92-Strontium, and three neutrons. This type of process is shown in the figure below. 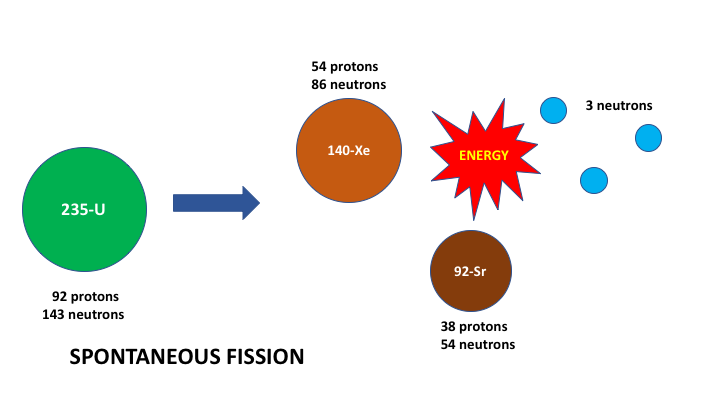 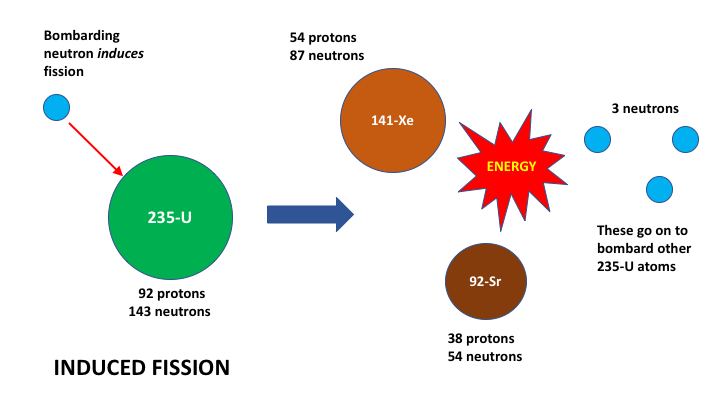 Nuclei can also be induced to fission when bombarded by neutrons, as shown in the figire on the right above. This can be a very rapid process known as a chain reaction. In the example shown below, 235-Uranium is induced to fission by absorbing a neutron. The neutrons resulting from this fission go on to cause other fissions - hence the name chain reaction. This is the basic idea of how nuclear weapons work - a chain reaction releasing a huge amount of energy by converting matter into energy.

Therefore, 235-Uranium is an element that can be used to make a nuclear weapon - if one can get enough of it. It occurs naturally as part of Uranium ore, but it is more than 99% the more benign 238-Uranium, which cannot be used to make a bomb. Separating 235-Uranium from 238-Uranium is difficult and expensive - it took a huge national effort of the United States to do this for the Manhatten Project in World War II.

An alternative method, one that is used by all countries trying to develop nuclear weapons, is to make an artificial element called Plutonium. 239-Plutonium has a half-life of 24,000 years and can be synthesized by bombarding the "benign" 238-Uranium with neutrons inside a nuclear reactor. This reaction is shown below. 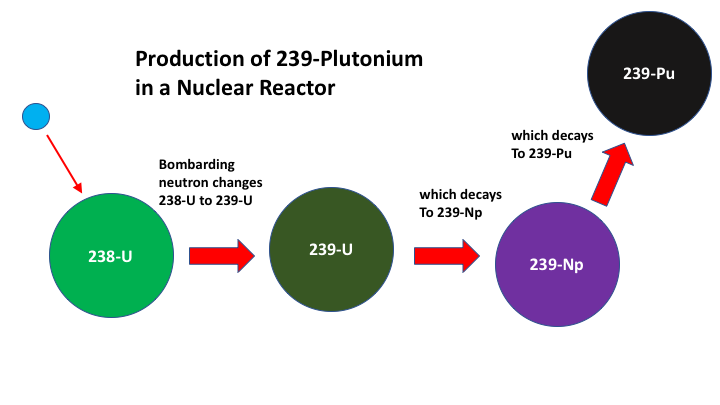 This process involves feeded the common form of uranium (238-Uranium) into a small nuclear reactor, where it is transmuted into 239-Plutonium, which can be used to construct a nuclear bomb. Since plutonium has different chemical properties than uranium, the plutonium can be separated from the uranium after exposure using relatively simple chemical methods.

Thus, if you can be sure if there are no reactors running in a region, you can guarantee that there is no plutonium production going on in that region.

The fission process produces nuclei that are inherently unstable - as in the example of 141-Xenon (half life 1.73 seconds) and 92-Strontium (half life 2.66 hours) above. When these unstable nuclei undergo radioactive decay, they emit neutrinos as a necessary part of the process. Discovered in 1956 at a nuclear reactor in the United States, neutrino particles are the most penetrating radiation ever discovered. They are like x-rays, only so much more penetrating that they can pass through the entire earth without stopping. Indeed, they have been used by sceintists to explore the core of the sun and the crust of the earth due to their remarkable "super power" to go right through thick layers of material. WATCHMAN builds upon the technology developed over the last sixty years to harness this super power to make treaties to limit or eliminate nuclear weapons production more effective via better capability for monitoring nuclear reactors from far away. This is not trivial, how does one detect paticles that can easily penetrate thousands of miles of lead?

DESCRIPTION OF THE WATCHMAN NEUTRINO DETECTOR

Fission reactions actually produce anti-matter neutrinos due to the type of radioactivity that predominates following the fission itself. These interact very weakly with hydrogen via the Inverse Beta Decay reaction, as shown in the figure below. 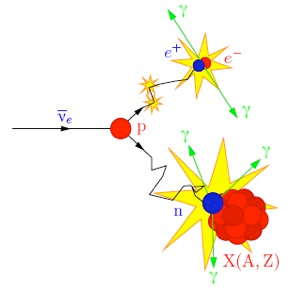 This reaction turns a hydrogen atom nucleus (really just a proton) into a neutron and an antimatter electron, which annihilates into pure energy when it hits a normal atomic electron. The energy of this annihilation produces makes a "prompt" flash of light lasting for a few billionths of a second. After wandering about for about 200 millions of a second (a very long time for modern electronics) the neutron that was produced will be captured by another hydrogen atom to form the element deuterium, a rare form of hydrogen. This releases a "delayed" flash of light, also lasting a few billionth of a second. By looking for a pair of "prompt" and "delayed" flashes occuring in close proximity to each other, the neutrino's unique interaction with hydrogen can be identified.

But wait, if the neutrino can penetrate so much matter why does it interact with the hydrogen in water. The answer is the fact that such interactions are a quantum mechanical in nature. There is a very, very tiny probablity of this reaction happening but there are a huge number of neutrinos being produced by nuclear reactors - about 1020 per second for a typical power reactor! That's 100,000,000,000,000,000,000 per second!

Even with so many neutrinos being produced, it takes thousands of tons of water to have the chance to stop enough to allow reliable detection. In addition, to better capture the neutrons, the water has to be "doped" with a chemical that enhances the light flash from the neutron capture.

The character of the neutrino interaction described above determines the design of WATCHMAN: (1) Large size - thousand of tons, (2) lots of hydrogen - water (H2O), (3) the ability to detect super-fast light flashes (billionths of a second) - PhotoMultiplier Tubes (PMTs), and (4) efficient detection of neutrons (in this case by adding the rare element Gadolinum as a capture agent).

In addition, the natural radioactivity coming from  the sun and galaxy at the surface of the earth makes it very difficult to pick out the neutrino interaction for the usual ho-hum phenomenon of "cosmic rays". To counter this, neutrino detectors are usually located deep underground. WATCHMAN is no exception.

underground. The tank size is still being determined, but will be between 20-25 meters in diameter with roughly the same dimension in height. This volume will have a inner fiducial volume of 1-2 kilotons, and between 3500-4500 large format PMTs. There will be an outer veto (similar to previous large water detectors) to reject cosmic ray particles that burrow down all the way from the surface, and also provide passive shielding from external gamma rays from the rock and steel components. An artist's concept of the detector is shown on the right.

It is expected that WATCHMAN will be upgraded as new technology is tested to improve performance. This is expected to include Water-based Liquid Scintillator (WbLS), large format fast photosensors such as the Large Area Picosecond PhotoDetectors (LAPPDs), and improved conventional Photomultiplier Tubes. These developments will allow WATCHMAN to serve as a 5% scale prototype for the proposed THEIA experiment. Theia will be a "Next Generation" scientific instrument that can be used to further investigate the properties of neutrinos, which we are finding to be very different that other types of matter.  UC Davis has been one of the lead institutions pursuing this technologically advanced detector. 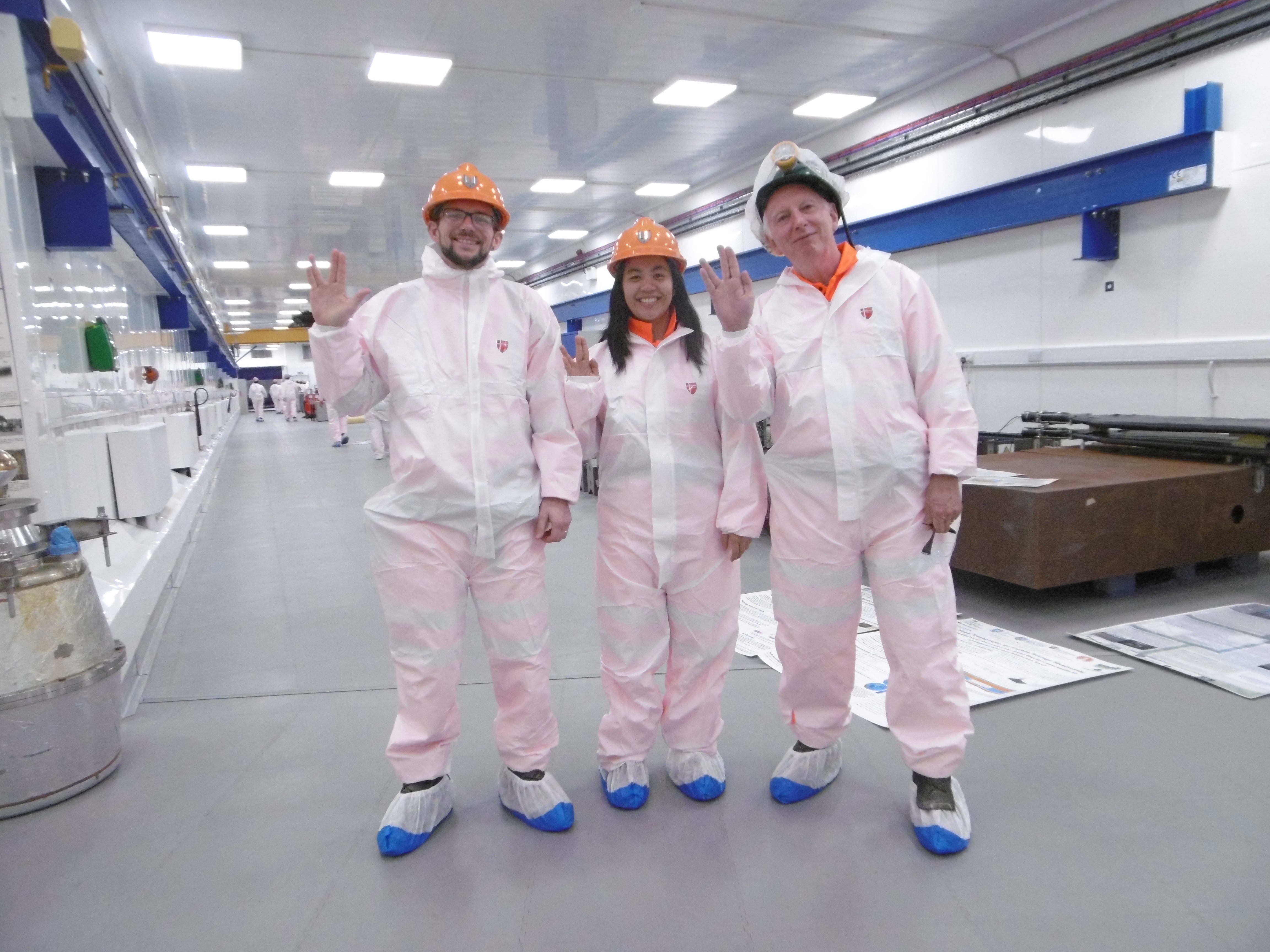 WATCHMAN has been approved for construction by the US Department of Energy in collaboration with sister agencies in the UK. The kickoff meeting to move towards a preliminary design was held at Sheffield University in January 2018. This was followed by a visit the Boulby Lab . The picture to the right shows UC Davis students Julie He and Teal Pershing inside the lab with Professor Bob Svoboda.

At UC Davis, we lead the Photomultiplier Working Group (responsible for about $10M worth of fast photosensors) and also are involved in computer simulations of detector performance and sensitivity to neutrinos.  We worry a lot about the  material compatibility of detector materials with gadolinium sulfate and pure water. In addition, we are leading the effort to make sure WATCHMAN is upward compatible with WbLS.

The WATCHMAN Collaboration currently consists of a consortium of universities in the US and UK, with Lawrence Livermore National Lab (LLNL) taking the lead for the construction project. Along with UC Davis, other institutions involved are: (1) UC Berkeley, (2) Brookhaven National Lab, (3) University of Hawaii, (4) Iowa State, (5) Penn State, (6) University of Pennsylvania, and (7) University of Sheffield. The picture below is of about 2/3 of the collaboration underground at the Boulby Lab in January, 2018. 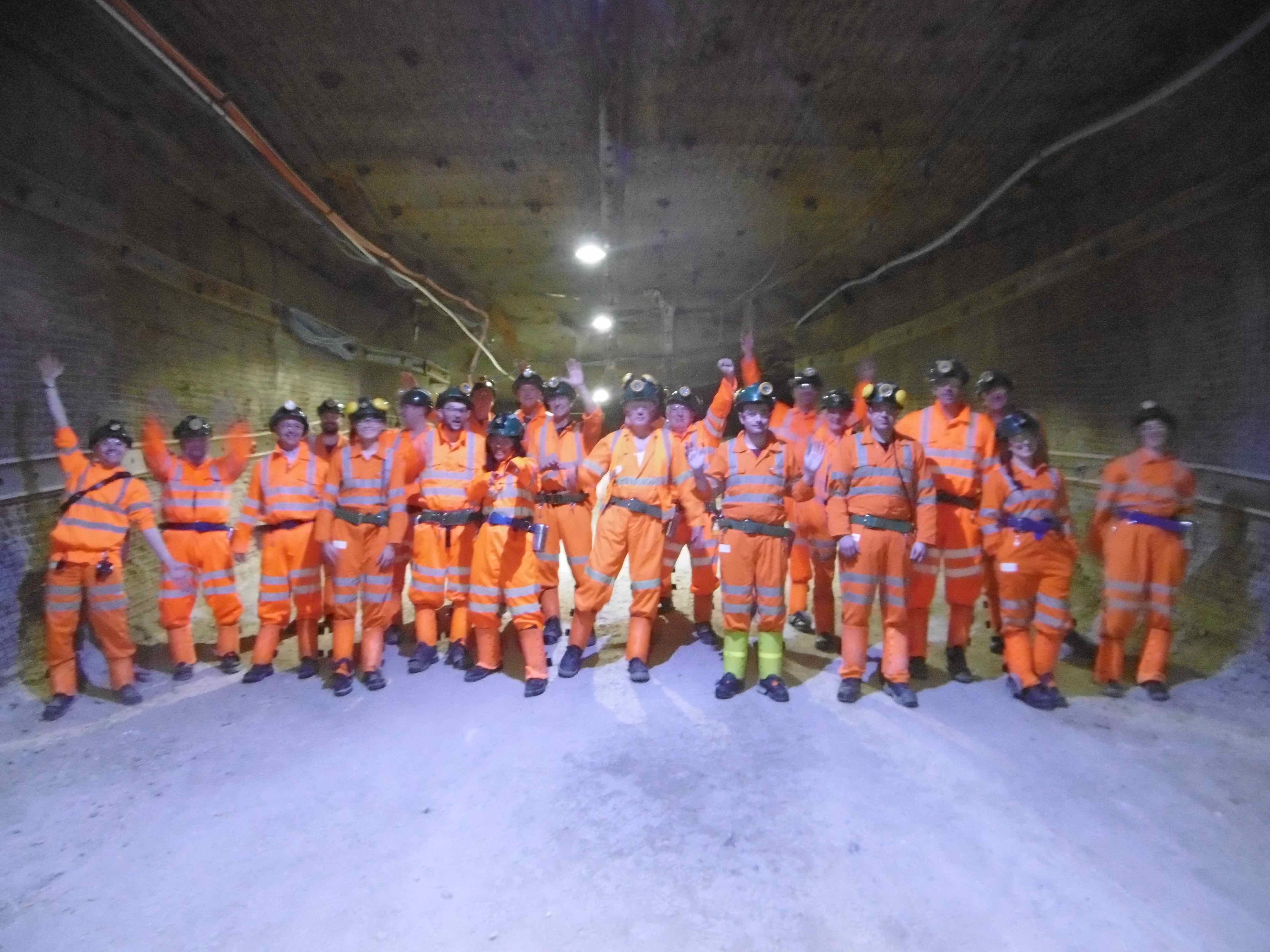